I go to Writers’ Week for a number of reasons. One is to identify as a writer and to get ideas about writing. Another is to give myself time to think, particularly about the world around me. Two sessions were inspirational for this latter purpose.

Clive Hamilton’s book Silent Invasion: Chinese Influence in Australia received publicity recently because a number of publishing houses were not game to publish it. Just over a week ago the book came out, thanks to publisher Hardie Grant. In this book Clive Hamilton examines the influence of the Chinese government in Australia. At the talk, he paid tribute to his researcher, Alex Joske. 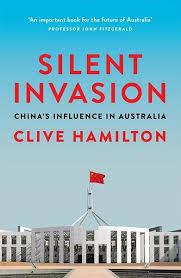 Most of us are aware of the consequences of some of the more blatant instances of politicians/ political parties accepting money from China. Clive Hamilton was convinced of the need to write this book at the time when (then) Senator Sam Dastyari became embroiled with such events. In the preface, Hamilton says: ‘China and Australian democracy had collided again. Something big is going on, I thought. I decided to investigate and write a book so that Australians could understand what has been happening to our country.’

Most of us are aware of the cases that have made news headlines, such as that of Dastyari, and the selling of the Port of Darwin. But in this book Hamilton reveals some of the more insidious happenings: Chinese students in Australia being prevented from protesting, CCP agents observing Chinese at their church services in Australia, the role of the CCP and the Chinese military in funding (and therefore having control over) some research in Australian universities. He also draws our attention to instances of Australia supporting the Chinese military, for example by building aircraft components.

Hamilton implied that Australia should see itself as a bigger player in international politics. He drew our attention to the fact that the GDP of Russia is the same as that of Australia, yet, he said, we think of Russia as a bear and Australia as a koala!

It was encouraging to see that there was a huge audience at this talk and there was a sense of mutual support and agreement that the criticism and anxiety raised by Hamilton writing this book sends a stark message about freedom of speech in Australia. 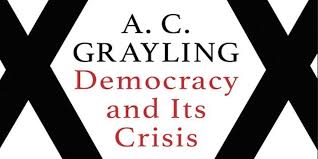 In another session, English philosopher A.C. Grayling and Australian journalist and political commentator George Megalogenis met to discuss Democracy and Populism. The introductory statement was that this is the 12th consecutive year that democracy has been in retreat around the world. How might this situation be reversed?

A.C. Grayling suggested that we must stop politics from being a career. As a ‘career’, the participants are more interested in keeping their jobs and their ratings than in thinking intelligently about the problems facing the country/ the world. He also suggested later that the role of a politician these days is not attractive to highly intelligent people, who can make more mark in the world and earn more money working in Silicon Valley.

What if the world just wants security and not the freedom of democracy? Grayling reminded us of the quote of Benjamin Franklin : Those who would give up essential Liberty, to purchase a little temporary Safety, deserve neither Liberty nor Safety.

Grayling reminded us that it is essential for people to feel that their vote counts.

George Megalogenis stressed the need for transparency in democracy, yet politicians now avoid ‘difficult’ journalists – they prefer to be seen doing the right things – it is easier to walk around a work site wearing high vis protection gear. Yet Megalogenis is hopeful that there is a new breed of younger politicians who can relate to younger people (under 45) because these politicians have grown up in the world that younger people understand.

Grayling finds encouragement in the young people in US currently campaigning for gun control.

2 thoughts on “Free Speech and Democracy: A Further Taste of Adelaide Writers’ Week”