There are many attractive things about this week of listening to authors talk about their work — one of the main being that the main events are free. We sit on the banks of the Torrens River, in the Pioneer Women’s Memorial Garden, in the summer sunshine, appropriately shaded by blue canvas, with a choice of parallel events on East Stage and West Stage.

John Boyne had come from Ireland. He has written eleven books for adults (there was discussion about the unnecessary labelling of books as ‘for young people’, ‘for adults’). His most famous book is The Boy in Striped Pyjamas, which was a New York Times No.1 best seller and sold 11 million copies. 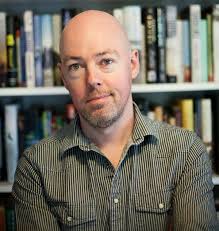 John was here to talk about his most recent novel, A Ladder to the Sky.  The focus of this story is something that would intrigue most writers:  Maurice, an aspiring author charms a celebrated novelist, Eric, as Boyne says, he ‘reaches inside’ him. This raises questions such as, who do stories belong to? Do we own our own stories?  Do we have the right to tell other people’s stories? Boyne said, ‘There can be no discussion of morality when it comes to art’, and ‘I read other people’s stories … that is why I write’. He says he was strongly criticised when he wrote a book about a transgender teenager — because he is not transgender. Boyne points out that the book was written from the point of view of the teenager’s little brother: it’s a novel.

John Boyne was asked, What does ‘success’ mean for a writer? For John , it’s not the winning of prizes (he has won some) but how well you have achieved what you have set out to say.

There is a section in a Sydney bookshop for ‘plotless novels’. John said that he believes the story is really important. He wants a page-turner. For him, a good novel is one where you need to want to know what will happen next.

In The Ladder to the Sky, young Maurice is ambitious — but he is ambitious for fame, not for the quality of the work. Clearly John Boyne doesn’t believe in aiming for fame. 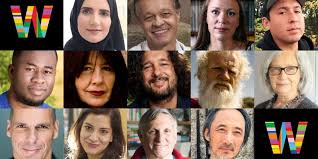 From hearing John Boyne, I listened to a couple of academics, Martijn Boersma and Justine Nolan, discuss ‘Modern Slavery’. I was reminded of how frequently we support the exploitation  of others — using palm oil, coffee beans, the fishing industry — apparently 95% of retail chocolate is not certified free of child labour. There is now a modern slavery law in Australia, but no penalties for not complying! There were a few encouraging examples given of powerful people, such as ‘Twiggy’ Forrest, speaking out against modern slavery — satellite imagery can survey workers at brick kilns, block chains can show the complete history of a transaction. But it was pretty depressing to realise that the world hasn’t progressed a huge way since the pre -1860s slave trade. 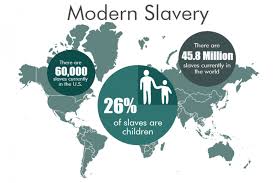 Another fascinating non fiction book is by Hannah Critchlow, The Science of Fate. It used to be that discussions of Free Will and Determinism, were the province of historians, philosophers and theologians. Now, neuroscientists are important contributors. It has been shown that neuroplasiticity is an important factor in learning. We are aware of biological determinism through genomics — eg prediction of our Body Mass Index, schizophrenia, IQ, how long the natural course of a person’s life will be. Neural circuits can be studied from 20 weeks’ gestation to find whether a person will have, for example, autism or ADHD.

There is now some serious study of Epigenetics — can memories be passed across generations biologically? Some studies with mice suggest that they can be. Maybe experiences of Holocaust survivors explain depressive illness in family members generations later.

When I opted to go to a talk by Bart van Es, I was expecting to hear of another story like The Diary of Anne Frank. Bart van Es, a professor at Oxford, is recognised as a Shakepearean scholar. But this book takes a very different path. van Es, whose family is Dutch, was aware that something had happened in his family during World War II — there was some secret — not talked about. When a Great Uncle died, Bart van Es realised that history would slip away if he didn’t try to get to the bottom of what had happened. As he said, ‘without families you don’t get stories’. Lien was still alive, in her eighties. She had been sheltered from the Nazis by the van Es family and other families from 1942 to the end of the war. Bart tracked her down and visited her. He’d been told that she would be reluctant to talk about her wartime experiences but he said that when Lien opened the door of her apartment ‘it felt like family’. The resulting book tells Lien’s story, but not just that. It describes how difficult it has been for her to live with those experiences. How there was a family rift as recently as the 1980s, resulting from tensions accumulated from the time of the war. It questions why it was that the Netherlands society  in the 1940s was ‘unresilient’ — how do you respond when authority is not to be trusted? There had been no recorded anti-Semitic attacks from 1550 to 1942 — the Dutch people were not used to having to be resistant. Apparently the family friction of the 1980s revolved around the grandmother’s belief that Lien should ‘move on’ — forget that time. Lien’s parents had been sent ‘East’: that meant to a concentration camp. When, at the end of the war, she realised their fate, she let two rings her parents had left with her drop through floor boards to be lost forever. But of course that physical act could not expunge the pain of the separation. Many years later she visited Auschwitz and said, ‘It’s over’. The book is also about what it was like for Bart van Es to uncover this family story.