In spite of the heat, crowds of people attended the discussion with Leigh Sales, popular ABC presenter of The 7.30 Report, among other things. Leigh started by saying that while she conducted her interviews, so often with people who had been ‘blind-sided’ by some terrible event, she kept asking herself, when is something going to strike me? And it did, in 2014. The birth of her second child was highly traumatic. Leigh and the baby ended up in Intensive Care — she didn’t see the baby for 3 days — the baby contracted viral meningitis among other things. Then … her 2 year-old had some problems, Then … Leigh’s marriage of 20 years broke up. Leigh mentioned ‘doubt and dread’ — how rapidly life can change. 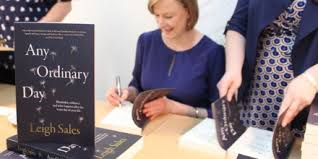 Leigh tried to gain control of her life by writing Any Ordinary Day. And she has realised that you can’t have complete control of your life. It isn’t a book about Leigh. She has interviewed a bunch of resilient survivors of all kinds of traumatic experiences. She has also looked at research into the brain, which shows that humans prefer certainty and predictability — we look for cause and effect. We think we can see cause and effect where there is none — because we want it so much.

Leigh spoke to the Vice Chancellor of Sydney university, to get a clear perspective of what to examine, where to go. He too had gone through a devastating personal experience. She spoke to people about the science of the brain and, although not a believer, to a priest. After speaking to these people she said she felt ‘strangely buoyed’.

There was discussion about how to interview people who have gone through severe trauma. Leigh said she tried not to cry in front of them — ‘it’s about them, not me’. There was mention of how important it is to talk to someone after they have been through some terrible ordeal — don’t make it worse by abandoning them, even if you think you don’t know what to say. There was mention of the different methods of interviewing on TV and for a book. On TV you have limited time — you interrupt to get to the point. When interviewing for a book it’s best just to ask a leading question and then let the interviewee talk: ‘How was that?’ rather than ‘that must have been awful’.

I hadn’t heard of Bruno Maçães. He was Portugal’s Minister for Europe. The government changed and he left the country (comments from the audience — a pity that more defeated ministers don’t do that!) and travelled — a long journey across Europe and Asia — he said you must go by road or train, not plane. You need to approach a city gradually. He started by saying that Australia could be the first Eurasian nation.

There was much discussion about what is the division between Europe and Asia. It has existed for centuries, yet it is artificial. Think of the difference between Japanese and Arabic people. Historically, Asia has been the ‘anti-Europe’. Does ‘Asia’ mean anything to Asians? Maçães described it as a ‘European myth’. 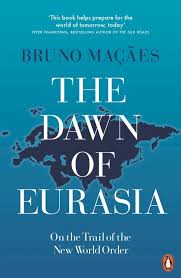 Maçães now lives in Beijing. He said that arriving in Beijing is like arriving in the future. There is a love of technology and history suggests that technology is usually a basis for power — he reminded us of the superior technology of the 15th Century Portuguese, with their ship building industry. Maçães gave some examples of Beijing being like the future: you don’t use cash (we had come across this the previous evening at the Adelaide Festival Centre where we had to buy drinks with a card), there is now visual recognition at ATMs. New Chinese cities are being created. He described a gambling culture — your life is a gamble. According to Maçães, two big differences between China and Europe is that in China technology is embraced and English will not be the common language.

Maçães compared the world today to the world of the 19th Century — but this time the world will not be led by the West. He said, we are entering ‘a world without adult supervision’. Asked about climate change, Maçães suggested that within about 30 years there will be trade routes through the Arctic (I wondered what there might be to trade — what will we be eating?), Arctic beach resorts with 24 hour sunlight.

I left the talk more pessimistic than Maçães seemed to be.