An annual event for Elwood Writers is attendance at the Adelaide Writers’ Week.  We are all over here in Adelaide — the first day was one of  40 degree heat. We particularly enjoy this festival because of its location on the banks of the Torrens, the excellent choice of speakers and … most events are free. 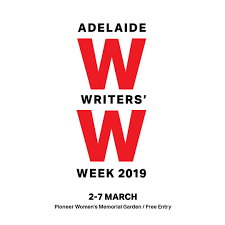 The first event I attended was an interview with Emeritus Professor Gillian Triggs, former President of the Australian Human Rights and Equal Opportunity Commission, who has written a memoir, Speaking Up.  On the front cover, Geoffrey Robertson QC, Human Rights Barrister describes Gillian Triggs’ way of refuting her detractors as being ‘with reason not rancour’.  How true. Through heated, often mysogenistic battles, Professor Triggs manages a calm demeanour. She always refers to people with courtesy: Mr Turnbull, Mr Abbott, Mr Dutton … Most of the talk was about her work in human rights, but there was some mention of her early life. Until 12, she lived in England. It was just after World War II. She said that the end of the war and effects of the holocaust ‘seeped’ into her life. From this childhood she remembers ‘the smell of poverty’ — TB, coal, bombed out sites. 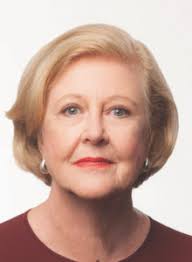 After a career in Law — particularly International Law, the invitation to become President of the Human Rights Commission came from Nicola Roxon, who was Australia’s first female Attorney General and happened to have been a student of Gillian Triggs. There was discussion about the weakness of Australia’s constitution and the fact that Australia is the only Western democracy that doesn’t have a charter of human rights.  The constitution is more to do with state powers than matters such as freedom of speech. As a model of what could be, Gillian Triggs held up the example of Dr H.V. Evatt, who, as Chief Justice of the High Court and leader of the Australian Labor Party from 1951 to 1960, linked the importance of human rights to world peace. Gillian Triggs reminded us of the Magna Carta (1215): no man may be held without the judgement of his peers. Yet in Australia we have held people in detention without allowing them to go before a court.

There was discussion about the ‘cycle of poverty’ for women — the gender pay gap in Australia is increasing rather than decreasing. For example, at present women retire on 46% of the superannuation that men have. The figures don’t match our perception of ourselves. Gillian Triggs  suggested that her own generation of women ‘played the game’ — of getting well educated, turning up for work on time, nicely dressed … and consequently lost the ability to challenge the rules. The more privileged women must speak up for those ‘at the bottom of the pyramid’.

Gillian Triggs also said that we will never be a coherent democracy unless we engage our indigenous people. She finds ‘identity politics’ an offensive term.

Kassem Eid was born a refugee in Syria — his family having been ‘kicked out’ of Palestine in 1948. He described Syria as a place where Muslims, Christians and Jews lived in harmony before the military coup. Kassem Eid learned his excellent English from reading The Reader’s Digest as a child. During the military regime, Eid’s family lived ‘under an iron curtain of fear’. Before the revolution it was Eid’s dream to leave Syria but afterwards he wanted to stay there, to make Syria a better place.

Children wrote ‘freedom’ on their school walls and were arrested and sexually abused. You are ‘safe’ if you do nothing, he said. If not, the punishment is unimaginable. By 2012 there was a siege around Kassem Eid’s town (near Damascus). Power was cut off. There was no medicine. ‘They bombed the shit out of us.’ Kassem Eid and his remaining friends and family survived by eating grass and a few olives. He described old Soviet/ Nazi tactics that were used. A lot of journalists lost their lives, he said, trying to send out images of what was actually happening. Then came what he called ‘Judgement Day’ in August 2013. He described a most terrifying and unimaginably horrific gas attack — everyone was suffocating — ‘something I cannot describe in words’. He was thought to be dead but he survived. He picked up a gun for the first time. He had not wanted to resort to violence.  ‘All I could think of was revenge.’ He ended by saying, ‘refugees love life — if not they wouldn’t go through such danger to get the minimal things a human being should have’. Having mentioned the pain of civil war where a friend fights a friend, he said, ‘get to know people that you think you hate’. I walked out holding back tears. Why hold them back?

After this devastating presentation  it was a relief to attend a session that focused on writing ‘what you know’, although it turned out that what the speakers ‘knew’ was still pretty shocking. Joelle Taylor, a poet from the UK has written Songs My Enemy Taught Me. She said that you ‘own those dark spaces’. Her ‘dark spaces’ were particularly about being sexually assaulted: ‘No one notices/ That the daughter is eating herself’. Joel helps others to write. Asked, can you write successfully about the banality of life, Joel said, ‘we need those stories, we need to find the beauty and poetry in going to the shops.

Before flaking in 40 degree heat, I attended Toni Jordan’s session on her latest novel The Fragments.

Toni Jordan said that for her, the hardest part of writing a book is getting the ‘idea’ — by this she meant, the idea that will spark off the story. For this book she was inspired by the publication of a second book by Harper Lee, more than fifty years after her first novel, To Kill a Mockingbird, which was highly acclaimed and won the Pulitzer Prize, and also by the fact that the identity of successful writer Elena Ferrante was revealed — she found Ferrante less interesting once she knew who she really was. Thus formed the idea of exploring author identity.

Toni Jordan doesn’t enjoy doing research for a book. She says she does as little as possible: ‘readers just need to feel as if they are there’. She in fact does what research is needed after writing a first draft of her book. Then she finds Trove very useful. She prefers not to have to move away from her desk.

Asked how she built up the ‘architecture’ of the book, Toni replied that she is a ‘knitter’ rather than a ‘quilter’. A knitter must start at the beginning (casting on) and continue, writing in the order that the book will be read. On the other hand, a ‘quilter’ would write ‘scenes’ and piece them together later.

Speaking of description (eg of surroundings) — ‘the particulars’ must always relate to the character . For example, in The Fragments, James lives in an old tumbledown Queenslander — this tells us a lot about him.

And, apart from Toni saying that when she’s finished one book she thinks she’ll never have another idea, there’s another book on the way — a clue to it is a tattoo on Toni’s arm — don’t worry, it’s nothing to do with tattooing (or dragons).

View all posts by Jennifer Bryce